A Tribute to Swami Girijananda

Swami Girijananda, (Girija Moran) passed away in her home in Arcata, California in the early morning of October 31.. She was an extraordinary spiritual teacher and yogini. She taught me a lot when I was studying with her and Swamiji during the 70s in the Ann Arbor ashram. She was beautiful, compassionate and wise. She could do everything. She is much loved and will be sorely missed. Swamiji wrote this the day of her samadhi.

Girija and I met on a blind date in July 1968. We got married in December of that year. I got a job teaching at Indiana University and we moved to Chicago. Soon our lives took a spiritual turn.

We met Ram Dass in February 1970 and decided to go to India to find a Guru. We went overland and met great beings and yogis. We studied with Hari Dass Baba and Sri Goenka.

Ram Dass introduced us to Swami Muktananda, Baba. Baba was the real deal and more. We lived in his ashram in India for three years. Baba remarried us and called us Girija and Shankar.

We went on his Second World Tour and after awhile he sent us out to start the first Siddha Yoga Ashram in the West in Ann Arbor, Michigan. He invited us to take sannyas. Now we were Girijananda and Shankarananda.We were together in Ann Arbor for four years. 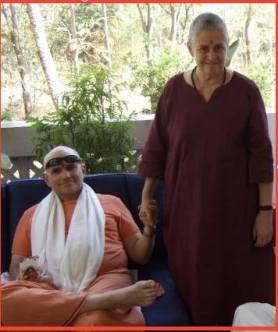 In 1978 our ways parted when Baba sent me to Los Angeles and then Australia. I missed her terribly but Baba told me to let her go, and told her that it was the right thing.Girija went on to run ashrams in several places.

After Baba’s death she studied Tibetan Buddhism for a number of years. Later she spent two years in our Mount Eliza (Australia) ashram and then went to Northern California to begin her teaching work. She was a great teacher.Soon she gathered a community of beautiful people around her. I feel for them. I know the grief of losing one’s spiritual teacher.

Girija is irreplaceable.She was a great soul, totally focused on her spiritual path. She was genuine, loving and very smart. Her teachings reflected her journey—Tonglen and compassion from Buddhism; Shakti and devotion from Baba.

She was strong minded and fearless. She faced death without flinching. In 1973 I thought I saw some bad aspects coming in my astrological chart. I thought they meant that Girija would die. I had a breakdown and had to be saved by Baba telling me to do the mantra. On the feared day no one died.

Now forty-five years later it has happened. I feel my own sadness but I know that Girija is joyful. She is with Baba and Bhagavan Nityananda in some higher realm.What a great soul! What a strong mind! What a true human being! She was a fierce, uncompromising Goddess.

I will always love her.

One thought on “A Tribute to Swami Girijananda”