Varanasi: The City of Liberation

After much wandering I have come back home
Where the wheel of time and change turns not
Where the natives are rich in the wealth of the heart
Where all live ever free in the City of God.
Ravi  Das

Leaving Ganeshpuri is always hard. Where can you go when you have been to the heart of God? But I had a desire to visit Varanasi, the city of Liberation and so Anjali and I headed off, which was a step into the unknown for me. Anjali, an intrepid trekker in her youth, had been there 35 years ago. Little did I know that step would take on unique meaning.

The city is known as Benares to the Muslims, Kashi to the Hindus and Varanasi to the British. It has many faces, many temples, many Samadhi shrines and many Gods and Goddesses. There is a Shiva lingam almost every step, and Hanuman, the monkey God, and servant of Lord Ram, is also present, as are families of monkeys who live on the rooftops. But, it is evident that the Goddess Ganga reigns supreme.

Hindu religious texts use many epithets to refer to Varanasi, such as Kashika, the shining one; Avimukta, never forsaken by Shiva; Anandavana, the forest of bliss; and Rudravasa, the place where Shiva resides. Kashi is mentioned in the Rig Veda that dates from 1700 to 1100 BCE. Hence archaeologists think it is the oldest city in the world.

According to one legend Kashi was established when there was a fight between Brahma and Shiva. It resulted in one of Brahma’s five heads being cut off by Shiva. It was customary that the victor held the slain adversary’s head in his hand and let it hang down as an act of disgrace and a sign of bravery. Folklore also says that Shiva settled here after his marriage to Parvati.

Varanasi’s history is fascinating. The Buddha gave his first teaching, ‘The setting in motion of the wheel of Dharma’ at nearby Sarnath. In the 8th century, the great Adi Shankara established Shiva as the official deity. Three poet saints that Baba used to talk about were also born there. Tulsidas, who wrote his epic poem the retelling of Lord Ram’s life, the Ramayana in the local vernacular. And, the poet saints Kabir and Ravidas were also born there.

Swami Nirmalananda of Svaroopa Yoga, to whom Guruji had given sannyas, had invited us to stay at her beautiful and modern Guest House which sits just back from the Ganges on the Narmada Ghat. Her home here is a brightly painted yellow building run by her adopted Indian son, Narayan, who was on duty for us 24 hours a day. He guided us, toured us, supplied us with food and generally watched out for us like a brother (see below).

Our guest house is the yellow building on back right. 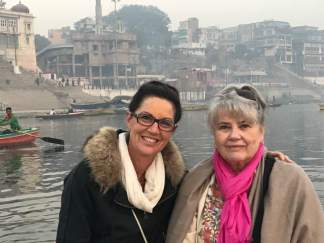 Our first day on the Ganges

The river has nearly a hundred Ghats, steps leading to its bathing sites, washing sites, and praying sites. To walk along the river means to walk up and down what seemed like hundreds of steps. Anjali called it ‘the city of steps’.

Buddhists, Jains and Hindus regularly pray and bathe at the banks of the river. Mother Ganges is a sacred deity, from whom everything is granted. Devotees say that She blesses everyone who comes to her. No matter what we give her, She remains pure.

There are four different morning and evening Aratis at the river, which is best seen from one of the many boats anchored near the Ghats–Assim,  Manikarnika, Maanmandir and Lalita, to name a few. They are mostly the same except for one, where the chanting is done by women. Brahmins face the Ganges waving lights, incense and other materials to the river. It is a kind nature worship. The Arati is reminiscent of a sacred dance done in perfect unison. It is utterly beautiful.

It is said that if you visit Varanasi in the right spirit, you are instantly free from rebirth. And so for Centuries thousands of Hindus have come here to die. All day long the cremation fires burn. The bodies are washed in the Ganges, mantras are chanted and the fires are lit. Even though electric crematoriums have been built nearby many families still prefer the old tradition. But next year families will no longer be able to cremate outdoors. Wood is a scarcity, and besides, the smoke is a pollutant that Varanasi can do without.

Many Hindu pilgrims are either ill, dying or dead. The energy seemed heavier than what I am used to. It is as though Varanasi is a battleground between spirit and matter. The soul departing the body leaves behind despair. Prayers are ongoing as seekers and mourners take consolation from Shiva and Mother Ganga. Candles on small leaf plates flow continually in the river as the feeling of loss is sacrificed into the river. It is impossible not to think of God.

There is so much that is difficult to see. Mangy dogs fight for survival and territory. There were human bones laying on the path where dogs have left them. Beggars and sadhus are so much alike it is hard to tell them apart, except for the worn orange cloth. In the middle of the grieving families vendors ply their wares.

Hundreds of Western sightseers soak up the atmosphere. I was surprised by the number of elderly fascinated by the mystery of death.  Some seek spiritual nourishment but most are tourists. Hatha yoga, meditation, vendors, worship, death come together in the maelstrom of life.

This is the land where Shiva rules, and has for centuries. The power of change is apparent. The beauty of the Ganges is both awe-inspiring and horrific as effluence from the sewers meets the purifying moving water as devotees bathe. Their devotion is so one-pointed that no one seems to notice the dark matter floating close to them. They are intoxicated by the moment of union with Shiva and nothing distracts them from their prayers. Anjali and I, on the other hand, feel brave as we scarcely dip our toes.

We were invited to meet Uma’s friend, Gopal, who runs the Kedareshwar B & B right on the river. He is a generous and charming host and his place is beautiful. He also offers beautiful Western breakfasts. A devotee of the Guru he is adamant that he will build Guruji an ashram in a village across the river.

There are so many temples it would be impossible to see them all in the time we had. And also, as a disciple I am more interested in Samadhi shrines, and the sages and saints of India. I am always on the lookout for their teachings and any available books in English. I found out too late that there are many samadhi shrines in Varanasi. Guruji mentioned in a phone call that he knew there was a samadhi shrine of  a great Siddha, an avadhut like Bhagavan Nityananda, close by. His name is Trailanga Swami and apparently he was over 300 years old when he died. We decided to go and I was looking forward to the peace that can be found with the Saints.

Sending our prayers down the river.

Narayan led us through the back narrow footpaths near the Manakarnika Ghat where a main Arati takes place. It was a relief to walk through the doors of the pristine atmosphere. A young priest was feeding Trailanga’s murti breakfast. I asked if I could photograph him and he said after breakfast. He gave Narayan a key to the underground cave where his body lay just behind a wall with his photograph on it. We meditated in the beautiful space of his Shakti.

Varanasi has a Shakti that I have not experienced before. Shiva seems more his destructive and transforming power. It is as though He is in concealment, hiding the light of Consciousness and only showing His moody painful side.

As I embraced this energy I understood that the light and the dark meet in a true joining of Shiva in His fullness. I kept thinking about the story of Arjuna and Krishna in the Bhagavad Gita. Faced with the destruction of his family Arjuna pleads with Krishna to see His true form. Krishna opens his mouth and all of creation pours out. The power of Krishna’s love gushes forth but so does all of the inherent darkness of manifestation. Horrified Arjuna begs Krishna to return to his human form.

And so here in Varanasi the constant churning of destruction is ongoing and sometimes disturbing to observe. But God’s grace prevailed and I was left with a fuller knowing of Shiva’s true nature. Just as we must come to peace with the dark and light within us, it is impossible to truly know God if we cannot find acceptance and understanding of His dark side. And so, I will always remember Him as the power of both life, and death.

I began to think of Varanasi as, ‘the city of renunciation’. The stillness of the atmosphere leaves no room for desire. Worldly matters become insignificant in the face of death. An intangible burden left me and I am lighter of heart.

I think that everyone should visit Varanasi. It left a deep impression on my soul and I wish that it will do so for you also.

May your journey be fruitful, uplifting and full of wonder.

Below is a video of my favorite temple, sadly it is falling into the river and a view of Varanasi as we motorboat north.

6 thoughts on “Varanasi: The City of Liberation”